Are you an adult Interested in our Credit courses?
Click here to make an appointment with the guidance department (must be over 18)→

We have 176 professional instructors.

St. Charles Adult & Continuing Education Centres aspire to instill confidence and self-esteem enabling all learners to reach their full potential in a diverse and respectful environment.

St. Charles Adult & Continuing Education Centres strive to provide the programming needs of all learners and dedicated to meeting their pathway goals so they will become productive and contributing members of society.

We Value the Person

We Value the Learning

Excellence: Striving to continuously adapt to the changing needs of our learners.
Service: A place providing life skills to be successful in the community in which we live, and to bring an awareness of social justice needs.

We Value the Community

Collaboration: A place where we work with community stakeholders to overcome the ongoing challenges of life.
Support: A place of mentorship and success encouraging responsibility for self and others.

The St. Charles Adult and Continuing Education logo is founded on that of the Hamilton-Wentworth Catholic District School Board’s and the beautiful imagery reflected from it. The fundamental components of the design are the cross and students.

The position of the cross between the two students reflects the centrality of Jesus Christ in Catholic Education. The two students of the logo are rich in symbolism. That one is larger than the other depicts Learning for Life; their graduation caps reflecting that all can learn and be successful; and their upward thrust signifying striving for excellence.

Message from our Principal

Welcome to St. Charles Adult and Continuing Education. St. Charles is pleased to be an integral part of your educational journey. Since 1985, St. Charles has established a tradition of delivering exceptional programs for adult students.

St. Charles provides opportunities for adults in completing a high school diploma, English as a Second Language, Academic Upgrading, Employment Training programs in Personal Support Worker and Culinary Arts, and General Interest courses. We have many programs that meet your goals and provide opportunities through different methods of delivery.

Our programs are designed with you in mind, providing opportunities to learn in a teacher taught class either through day program, Night School, and Online Learning. Summer School programming is also offered to both elementary and secondary students. Program information is available on our website.

The staff of St. Charles are skilled qualified educators, who exhibit our school motto “Learning for Life” through their passion, create an environment that is special and nurturing for students.

I invite you to come and experience “Learning for Life” and all we have to offer.

Please contact any of our sites to arrange for a meeting to discuss your academic goals, hopes and dreams.

A Brief History of St. Charles

St. Charles Adult Education Centre began as an essential component of an overall plan by the Hamilton Wentworth Catholic District School Board to address the growing needs of adult learners in the city. The Hamilton Adult Basic Education Association initially brought together members from the three local school boards, CAAT, Literacy Association, Hamilton Public Library and various regional and community agencies (social services, C.E.I.C., etc.). The Hamilton Wentworth Catholic District School Board was the only board in the education field that took the early initiative, and we have never looked back. Opening with three centres located in the city of Hamilton, and with a total initial enrolment of over 900 adult learners in Adult Basic Education and Credit Courses, the Centre was officially opened in September 1985, with headquarters in the former St. Charles Catholic elementary school.

St. Charles became the headquarters for the Extension Education Section (Continuing Education) Offices and the new Adult Continuing Education Centre for the Board. The projected enrolment for the first year was sixty adult learners in Adult Basic Education and credit programs. The actual enrolment after the first week of registration was well over 200 adult learners. St. Charles began to meet the growing need for adult education in the City of Hamilton.

What made St. Charles such an early success in the adult learning field? Visionary central and local leadership, a professional and caring teaching staff, a hard working support staff, and a philosophy of inclusiveness that respects the cultural and religious diversity, gender and potential of each student.

The initial program offerings consisted of Basic Literacy and Numeracy, Grades 9-12 English and Math credit courses, and a Co-operative Education program for adults. Subsequently, English as a Second Language, Typing and Law were added to the program. The program utilized the adult learning model wherein students worked at their own pace, with help from an instructor. St Charles also featured free registration and ongoing intake of students throughout the year. Shift workers were welcome, with evening classes added to the regular complement of day classes. 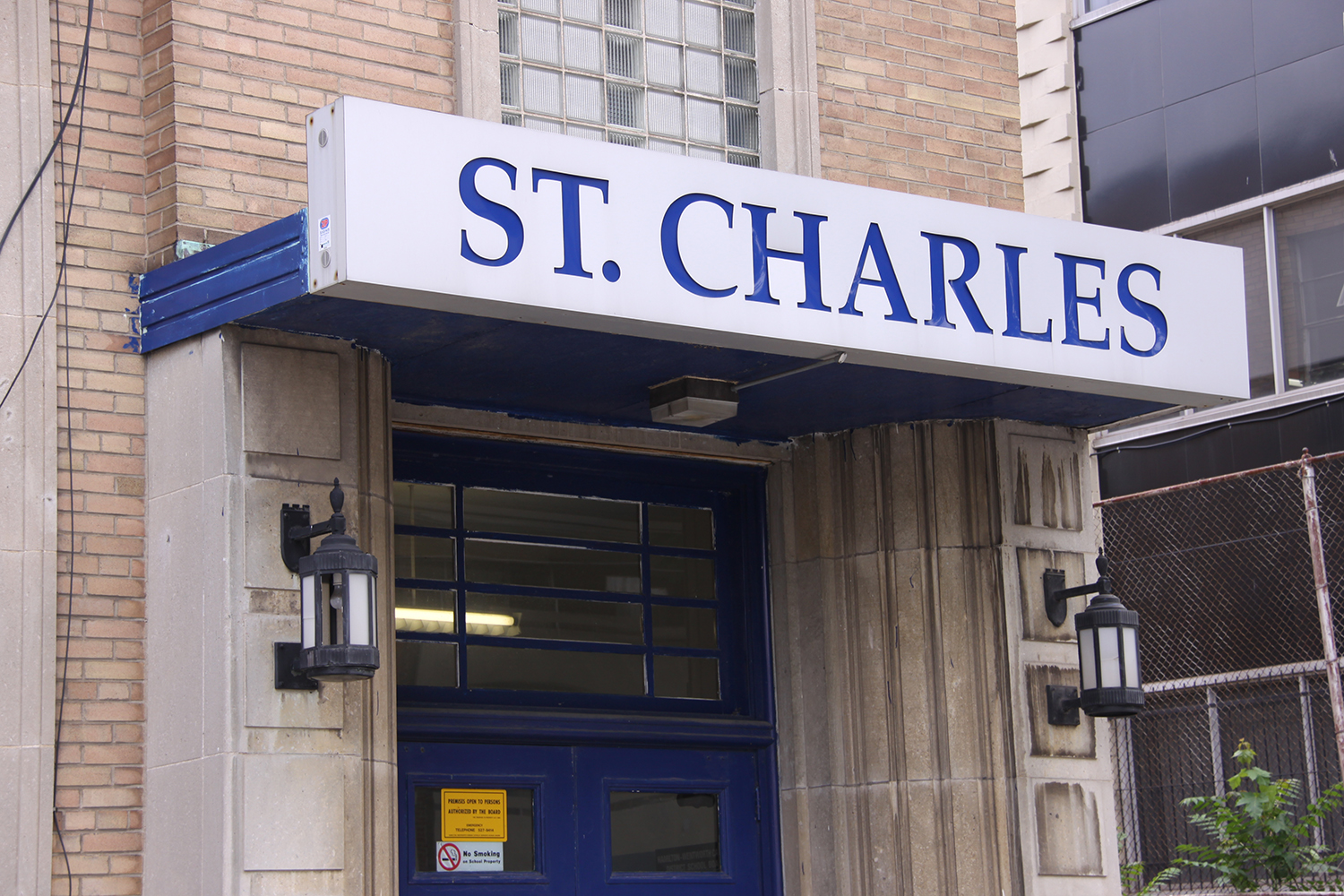 As the St. Charles program became better known throughout the region, community groups wishing to establish a class within a housing project, shelter or agency location requested assistance. Thus developed the St. Charles Outreach Programs. Currently, St. Charles collaborates with Catholic Family Services to provide credit teachers at St Martin's Manor, which is a home on the Hamilton mountain for teenage mothers and their children. St Charles also collaborates with the Little Brothers of the Good Shepherd to provide credit teachers at Notre Dame House, a shelter for homeless and street involved youth, located in downtown Hamilton.

St. Charles has always been known as an outstanding leader in the teaching of English as a Second Language (ESL) and Language Instruction for Newcomers to Canada (LINC). St. Charles is recognized throughout the province of Ontario as a key partner with the federal and provincial Ministries of Citizenship and Immigration. St Charles was the first ESL service provider in the City of Hamilton to provide Canadian Language Benchmark Assessments prior to the introduction of CLARS. CLARS now offered through the YMCA. This allows the students to be given authentic and credible language assessments in order to move up the CLB stepladder. Members of the St. Charles staff provide valuable insights into the changing needs of immigrants in the city.

One of the hallmark programs offered at St. Charles is the Literacy and Basic Skills (LBS) program. This program offers a second chance for learners who did not finish their education but who now wish to obtain valuable job related skills such as resume writing, time management, and interview skills along with basic math and language instruction. LBS is offered at most St. Charles centres and is a valuable community partner with social assistance programs such as Ontario Works and the Ontario Disability Support Program.

St. Charles leads the way in Hamilton with innovative programs, such as the Personal Support Worker (PSW) program. This course provides students with an opportunity to obtain certification in the growing PSW field. Most of our PSW graduates are immediately hired by hospitals, nursing homes and palliative care centres. Our PSW course is highly valued in the long term health care community in Hamilton. Our students display a high degree of professionalism and expertise at their work placements.

Other St. Charles initiatives include general interest computer courses, and Canadian citizenship classes and much more.

Charles Garnier, born in Paris on May 25, 1606, was a French Jesuit missionary, who was martyred at Sainte-Marie among the Hurons, near present day Midland, Ontario, Canada, on December 7, 1649.

The son of a secretary to King Henri III of France, Garnier joined the Jesuit seminary in Clermont in 1624 and was ordained in 1635. His father initially forbade him from travelling to Canada (which was then called New France) but Charles was eventually allowed to go and arrived in present day Quebec in 1636. Charles travelled immediately to the Huron-Wendat mission, along with fellow Jesuit, Pierre Chastellain.

Father Garnier spent the rest of his life as a missionary among the Hurons, never returning to Quebec. The Hurons nicknamed him "Ouracha", or "rain-giver", after his arrival was followed by a drought-ending rainfall. Father Garnier was greatly influenced by fellow missionary, Jean de Brébeuf, and was known as the "lamb" to Brebeuf's "lion".

When Brébeuf was killed in March 1649, Father Garnier knew he too might soon die. On December 7, 1649, he was indeed killed by the Iroquois during a raid on the Huron village where he was living. Father Garnier spent the last moments of his life ministering to the injured and dying Huron-Wendat people in the village.

Father Charles Garnier, now known as St. Charles, was canonized in 1930 by Pope Pius XI, along with the other Canadian Martyrs, and his feast day is October 19th.

Together we reach out to welcome the newcomer,
the stranger,
the disadvantaged.

Together we move out to teach the young and the elderly.

Together we listen to the shy,
the lonely,
the grieving,
the downcast.

Together we celebrate each effort,
each personal accomplishment,
each academic success.

Ours is the gift of care and concern
on days when no one else is there.

Ours is the gift of knowledge and skill
to build and rebuild lives.

Ours is the gift of affirming the ways of a loving God
in a world that needs reminding that life is still beautiful.

God of life,
Bless this relationship with our students,
strengthen our partnership with each other
and deepen our fellowship with all
as we strive to bring life through learning
into the lives of all students at St. Charles.